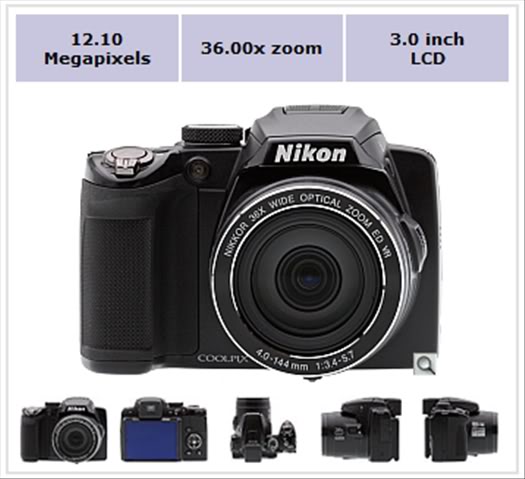 One of Nikon's most popular digital camera lines is its long zoom series, a dominating force now led by the 36x Nikon P500. The P500 breaks new ground, not just with its surprisingly wide-angle starting point of 22.5mm, but also with its 810mm equivalent reach, one that can retrieve details you can't see with the naked eye. Such dramatically different focal lengths bring with them various potential problems, which we'll cover, but in this hands-on preview we won't be able to show any images, as the camera we have is a beta, non-final production sample. The problems are obvious, really, and won't require image samples to explain; nor are they detrimental to the camera overall, they're just issues to understand when shooting a camera that goes to such extremes. We'll get to them in the shooter's report. 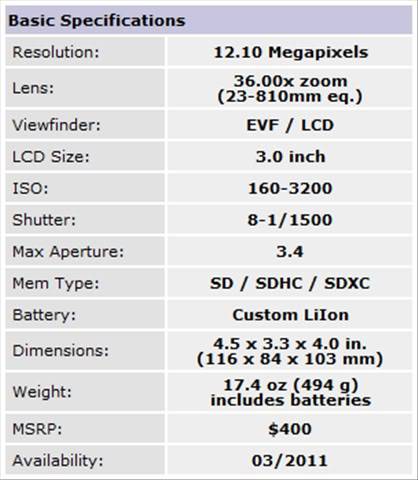 The Nikon P500 is its usual small, light, handsome self, with only a few immediately obvious modifications from its predecessor, the P100. First, and relatively prominently in the photo at right is the new alternative zoom toggle on the right side of the lens barrel. Though the zoom around the shutter button still works, you can use this new zoom toggle to best advantage when zoomed out to 810mm, as it encourages a two-hand hold for greater stability, whether you use the electronic viewfinder or the LCD. 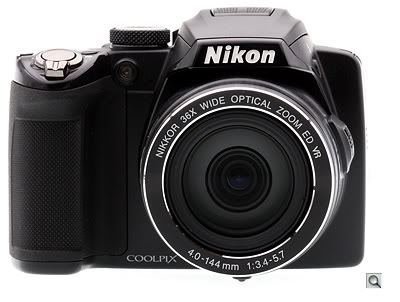 The rubber grip now has a diamond-cut texture wrapping around the front. It not only looks cool, it improves the grip noticeably. Just inside the grip surface, there's a raised ridge to help your fingertips get a good hold, even when you carry the camera without a strap, as I usually do. It's reassuring, and truly functional design. Above right of that is the very bright amber AF-assist lamp. Just above the left zoom toggle is the flash release button, where most everyone with long zoom or SLR digital camera experience expects it to be.

On the back, the 3-inch LCD dominates the area, protruding from the back as it does to make room for the vertically articulating mechanism. The screen swivels up more than 90 degrees for easy ground-level shots, or down almost 90 degrees for over-the-crowd shots.

The LCD is further enhanced with a higher-resolution screen: the 920,000 dots usually reserved for the big digital SLRs, impressive at this price point. The 230K-dot EVF is a lot more granular than the rear LCD; the eyepoint is good enough, though, that my glasses don't touch the rubber eyepiece, which is better than most inexpensive SLRs.

Left of the electronic viewfinder is the display selection button, with which you choose between the LCD and EVF, and the dioptric correction dial juts out from the side of the EVF. The DISP button cycles through three available display modes, and the relatively unique Movie mode selector/Record button is right of that; its switch choosing between the pre-selected High-speed (HS) and High-definition (HD) movie modes. A press on the red center button starts and stops recording. 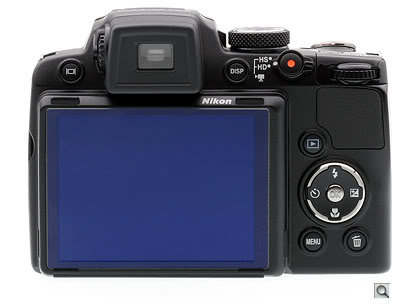 Right of that, the Command dial allows cycling through exposure options, like Program Shift, where you change the combination of shutter speed and aperture while the camera maintains the proper exposure for the scene. When shooting in full Manual mode, pressing the right arrow key on the Four-way controller switches between aperture and shutter speed settings, which you can then adjust with the Command dial.

Menu, Playback and Delete buttons are pretty straightforward, and the Four-way controller is also easy to understand. A simple rubber pad serves as a thumbgrip, reinforced by a subtle but effective ramp at the far right. 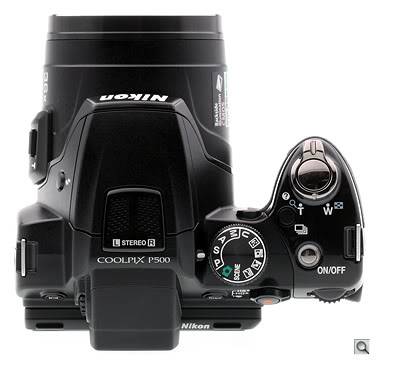 The top view shows a very SLR-like top deck, with a better look at the flash button on the left side, and the stereo mics just above the flash. The Mode dial is right of that, with pretty stiff detents, but the unfortunate ability to rest between clicks, as is inadvertently shown at left. I didn't have a problem with this, but it can cause confusion now and then.

Almost invisible in this shot is the small black Continuous mode button, which brings up a small list of available continuous modes, including high speed, low speed, and pre-capture.

The power button is ringed by a green light when first powered on; it also gives you charge status when the Nikon P500 is connected to a computer or charger via USB, glowing a bright orange while charging, green when fully charged.

Small metal strap lugs are better for video, because the cloth-to-metal contact creates little noise. Nikon uses D-rings on their SLRs, which raises the likelihood of such close rattling sound entering videos made with the cameras.

Sensor and processor.
Normally reserved for SLRs again, this section is warranted for the Nikon P500, because it has some special hardware under the hood. Its 12.1-megapixel CMOS sensor is designated "backside illuminated" because light it is engineered such that the sensitive side of the sensor has no other etched layers casting a shadow on the light-sensitive areas; instead, all that "wiring" is on the back of the sensor. Light can better reach each photosite.

Making the deal more sweet is the new Expeed C2 dual image processor. The new processor speeds up image processing, allows for more careful noise reduction, and corrects lens distortion for both stills and movies before either are saved to the card. Special video speeds and even high-speed still modes are possible thanks to this new processor.

Lens.
Ranging from 22.5 to 810mm is an impressive feat for any $400 digital camera to achieve. Providing f/3.4 at the wide end is also pretty nice, zooming to only f/5.7 isn't bad either. To the experienced long zoom photographer, it'll be an amazing tool, to be sure. Of course, the problem with making a camera that goes to extremes is that that's where most of its users will use the camera, at least at first. Most everyone shoots pictures of their friends and social events at the default setting, which is usually the widest angle available. The Nikon P500's widest setting is too wide for most people-pictures, introducing distortion that stretches heads and distorts bodies with unflattering results. On the positive side, it grabs darn near everything that comes within site of the lens, at least compared to any other long zoom digicam you've ever used. 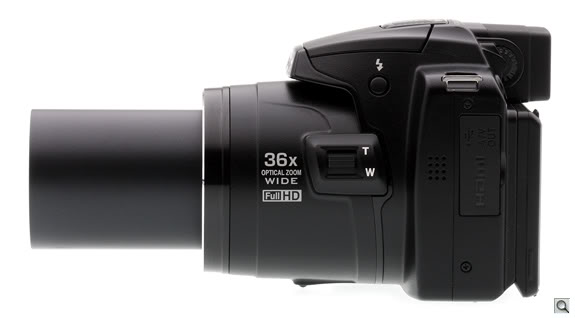 At the telephoto end you run into the opposite problem: Finding your desired subject among the rapidly shifting video image presented in the viewfinder. The view is so tight, that you'll want to start about halfway zoomed and track it in as the zoom progresses to help stay on target; otherwise it's like trying to find a star through a telescope. And once you've found it, the next problem is holding the camera steady enough to keep it framed, let alone get a blur-free shot. Nikon employs both sensor-shift image stabilization and electronic image stabilization, which we presume is digital image tracking by cropping the image somewhat and letting the processor track motion, contributing a little extra correction by moving the image capture area as well. And even with all that, two of our most stable SLRgear stabilization shooters had trouble keeping a subject centered at that focal length.

In short, the message is that experienced long zoom users seldom shoot at the extreme ends, especially for people pictures, instead zooming enough to crop the extraneous matter from the frame, leaving only the subject. That's the beauty of a zoom that's so long and so wide; you have that many more choices.

Auto panorama modes.
The dual processors also allow for a new trick for Nikon: Easy Panorama. Rather than shoot a series of carefully captured images and have them stitched in the camera or on a computer, the Nikon P500 allows you to capture either 180-degree or 360-degree panoramic images by just pressing the shutter and sweeping the camera over the image area. It's pretty straightforward, and seems to work pretty well. Once you press the shutter button, the camera prompts you with a cross with four arrow tips, telling you that you can sweep in any one of four directions: up, down, left or right. Once you start to move in a direction, the camera starts capturing, and a small slider appears on the bottom of the screen, indicating how much further you need to sweep. When it reaches the end, the Nikon P500 starts to process and save the image. It also works with the camera oriented vertically.

Continuous.
The Nikon P500 can capture five full-resolution images at about 8 frames per second in a single burst. That's as fast as a high-end digital SLR, though buffer depth is quite shallow. Some of the competition in this category can do up to 10 and even 40 frames per second, for reference.

Like those others, namely the Sony HX1 and Casio FH20, the Nikon P500 does some other tricks with this high speed capture capability. Separated into separate Scene modes on the Mode dial, these multi-shot modes capture several images and combine them into one to compensate for difficult lighting situations. Backlighting Scene mode, for example, captures several images at different shutter speeds to capture both the shadows and bright highlights and merge them to create a special HDR (High-dynamic-range) image right inside the camera; in all instances I've tried it, the camera has asked me to raise the flash before it would take the shot. Night Landscape mode is also more sophisticated, capturing up to five high shutter speed images into one single image and combining them into one, allowing a user to get a shot in low light that would normally require a slow, non-handholdable shutter speed. The traditional Night portrait mode, which still uses a flash (the camera insists), is also enhanced by capture of separate images, one with flash, the others without, to create a well-lit image that maintains the ambient light in dark settings.

Of course, there's also the new pre-capture mode, which uses the power of CMOS sensor and processor to continuously capture images; unfortunately, the Nikon P500 reduces the image size to 2 megapixels in this mode. You can also opt for 120 frames per second or 60 frames per second, both at 2 megapixels. Old Nikon standbys like Best shot selector (BSS), Multi-shot 16, and the Interval timer are also part of the Nikon P500's drive mode options. 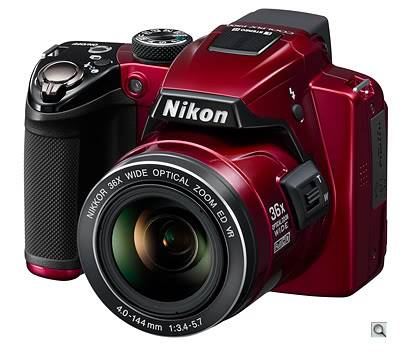